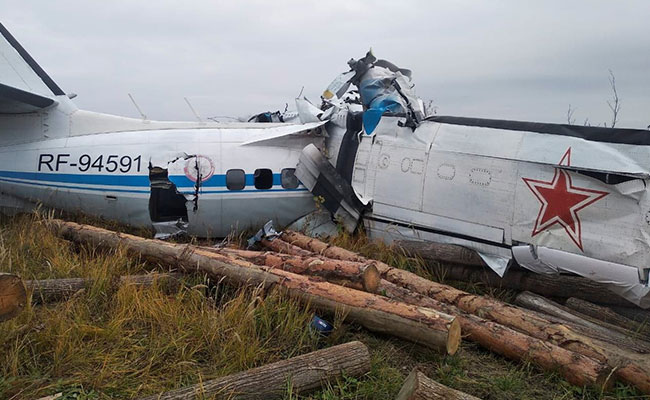 The wreckage of the L-410 aircraft at the crash site near the city of Mன்சnchelinsk.

A plane carrying paratroopers has crashed in central Russia on Sunday, killing at least 16 people, the state of emergency says.

The L-410, carrying 22 people, crashed while flying over the Republic of Tatarstan at 9:23 a.m. local time (0623 GMT), the ministry said on its Telegram channel.

“Six were rescued and 16 were evacuated without any signs of life,” the ministry said.

The ministry had earlier said 15 people were killed and 23 on board.

Pictures released by the ministry showed the plane being broken in half by a severely injured nose.

Six of the survivors have been admitted to hospital, the local health ministry told Interfax news agency.

Tatarstan leader Rustam Minnikanov was traveling to the scene of the accident, according to a report on his website.

According to Interfax, the aircraft is owned by the Russian Army, Aircraft and Navy Volunteer Association, which describes itself as a sports and defense organization.

The head of the organization’s regional branch said there was no blame on the parachuting club that arranged the flight.

“We are the best, we are in the top five clubs,” Ravil Noormegamedov told TASS News Agency, which hosted the European and World Championships.

The Czech-made L-410 light aircraft is one of the two aircraft used by the club, according to its website.

Russia is notorious for plane crashes, but in recent years major airlines have improved air traffic safety by switching from Soviet aircraft to modern jets.