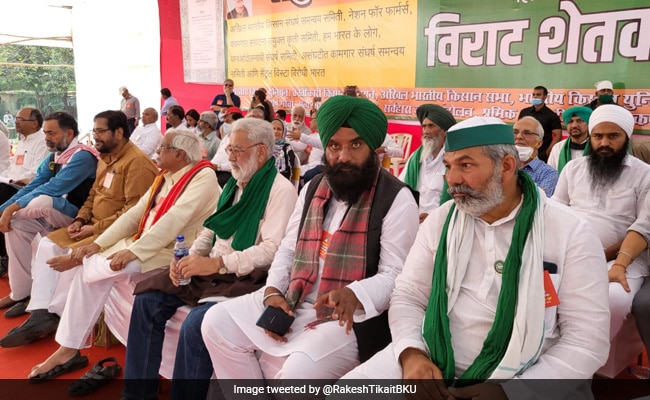 He accused the Modi-led central government of running without discussing the issue.

Bharatiya Kisan Union leader Rakesh Dikait on Sunday urged the central government to bring in legislation guaranteeing minimum support price (MSP) for crops to protect the interests of farmers in the country.

Mr Dikait said he had been a supporter of the MSP when Prime Minister Narendra Modi was the chief minister to attend the ‘Kisan Mahapanchayat’ (Farmers’ Mega Conference) in Azad Maidan under the banner of Samyukta Shetkari Kamkar Morcha (SSKM) in Mumbai. Nationwide legislation is needed to guarantee the interests of Gujarat and the farmers.

He accused the Modi-led central government of running without discussing the issue.

“Federal law should be brought in to guarantee MSP to farmers. There are many issues to focus on in the agriculture and labor sectors and we will travel across the country to highlight them,” he said.

Mr Decoit also called for funding for the families of farmers who died in a year-long struggle against the federal government’s three agricultural marketing laws.

Earlier this month, Prime Minister Narendra Modi announced the government’s decision to repeal three agricultural laws that had been at the center of farmers’ struggles.

Many farmers have been camping since November 2020 on the borders of Farmers Production Trade and Trade (Promotion and Facilitation) Act, 2020, Farmers’ (Empowerment and Protection) Price Guarantee and Farm Services Act, 2020 and Delhi. The Essential Commodities (Amendment) Act, 2020 will be repealed and a new law will be enacted to guarantee MSP for crops.

The federal government, which has held several rounds of talks with struggling farmers, has maintained that the laws are in favor of farmers, while protesters say they will be left to the whims of corporations by law.