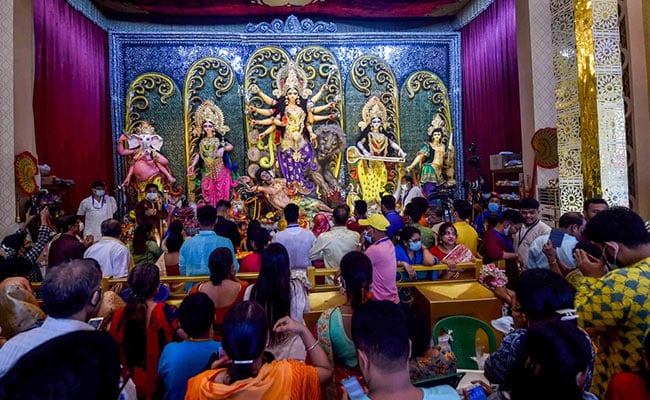 Devotees pray in a pandal during Durga Puja in Kolkata.

As Navratri and Durga Puja celebrations are in full swing, Govt security regulations across the country are being blatantly violated. With fears of a third wave coming up, the central government has warned that the next three months will be crucial for India. The government has launched the ‘Govt Mission 100 Days’ urging people not to reduce their security.

Lou Agarwal, Joint Secretary, Ministry of Health, said, “The next 3 months are very important, very important for India. We cannot reduce our security.”

Many temples and markets in Delhi witnessed a great walk during the Durga Puja festival on Tuesdays and Wednesdays. Thousands flocked to the Kalkaji Temple on Tuesday to offer prayers on Maha Saptami. Despite security checks and forced social distance, the crowd seemed to miss them.

The priest at the temple, Ashish Bhardwaj, told NDTV, “We Indians are excited. “With the blessings of the Mother Queen, the Govt cases are declining. But the crowd is higher than we expected,” he said.

At Chithranraj Park, though there were not a large number of devotees for the pandals, a large crowd was seen in the nearby market areas. Many rules were violated and sanitation was neglected as people lined up for food on the street.

Stall owners say the quarterly edition is low this year. Daban Acharya, who runs a food shop with cutlets and knife rolls at CR Park Market, told NDTV, “There is no charm in Poojo this year because of Kovit. This year it is very low and it has affected my business.”

The federal government is concerned that the low number of daily cases has given false hope and could derail India’s efforts to stem the third wave.