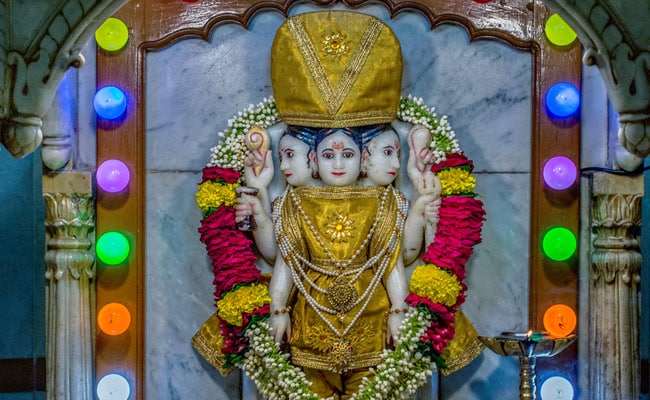 One of the 24 incarnations of Vishnu is believed to be Tattareyar.

Dattatreya Jayanti celebrates the birthday of Dattatreya, the Hindu deity comprising the trinity of Brahma, Vishnu and Shiva. It is celebrated every year on the full moon day of Margasirsha, the ninth month of the Hindu calendar. This year it is celebrated on December 18th. On this day, a large number of devotees fast from dawn to dusk and pray to Dattatreya. Dattatreya, blessed with the powers of the trinity, is depicted in photographs with three heads and six hands. He was born to Sage Atri and Goddess Anasuya.

One of the 24 incarnations of Vishnu is believed to be Tattareyar. Dattatreya, without a guru, attained enlightenment only by observing nature, so he is also said to be revered as a sage with infinite wisdom. Today, the festival is celebrated mainly in temples dedicated to Dattatreya in Maharashtra, Goa, Telangana, Andhra Pradesh, Madhya Pradesh and Goa.

In the photographs, Dattatreya is depicted holding the trident and tambourine of Lord Shiva, the Sudarsana Chakra and conch of Vishnu, and the Kamandalam or Brahma of Kamala and Japmala (beads) in their hands.

With him is usually Kamadenu the cow, the four dogs – Icha (desire), verse (lust), Asha (hope) and Trishna (thirst) referring to the four human qualities. Behind him is the Kalpavriksha (tree that gives life and preferences).